These yoga exercises are the simplified form of makar asana (crocodile pose) developed by Yogiraj Vethathiri Maharishi. This is a simple yoga asana not involving extreme stretching exercises for the lower back pain compared with other exercises.

So this form can be practiced by anyone who does not have any yogic background either.

All necessary measures mentioned in the yoga postures should also be considered in this exercise. One has to do this exercise with an empty stomach. For better result, morning hours are more preferable.

The blood circulation becomes normal in all parts of the body that in turn controls the blood pressure. 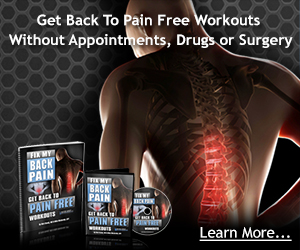 As this yoga exercise has a direct impact on the backbone, the problems related to the spinal cord will be controlled and the entire nervous system is relaxed. The joint pains get relieved and in women this yoga asana helps to balance the menstrual cycle.

This yoga asana has two stages and it requires less than 5 minutes of your time. 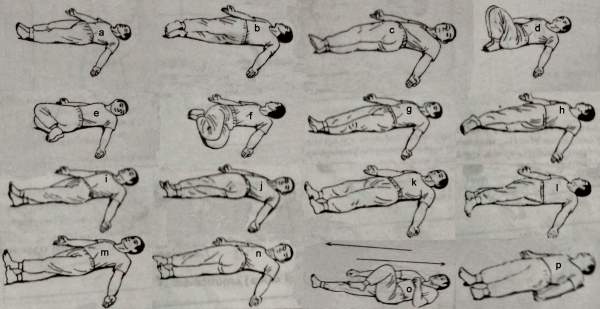 1. Lie down on your back and place your hands 45 degrees with your body. The tip of the thumb and the index finger should touch each other (chin mudra). This mudra has to be followed throughout the first stage excluding the last two steps. Keep the legs together by bringing the toes and ankles close to each other. (fig a)

2. Now twist your head to the right side along with the legs and body to the left side. While twisting, the position of the hands, shoulder and the chest should not be disturbed and should remain firm on the ground. The twisting of the head and body has to be done simultaneously. (fig b)

3. Now twist the body to the opposite as head to the left and the lower part of the body below the chest to the right. Repeat the twist for five times for each side. Do it in such a way that the one complete cycle will take barely one second. So that it requires approximately only 5 seconds for five times. (fig c)

4. Fold your legs by bringing the heels close to the thighs. The folds will be completely touching each other. Now repeat the twisting as mentioned in the above step without separating the two legs from each other. Repeat the movements gently for five times. (fig d)

5. Cross your legs at the ankle by placing the right leg over the left leg and repeat the twist for 5 times. While twisting the side of the leg should completely touch the ground along with the side of the foot as the other foot remains over it. (fig g)

6. Similarly, cross your left leg over the right leg and repeat it for five times. (fig i)

7. Place the heel of the right leg between the toe and the nearby finger of the left leg. Now it looks like the right leg is attached to the left leg over it. Now twist the body as mentioned before. Note that the sides of the feet should touch the ground. (fig k)

8. Similarly, place the left leg over the right leg and continue the process for 5 times as before. (fig m)

9. Fold and lift your right hand slightly above the ground by keeping your palm closed. Also, fold and lift your right leg where the position of the knee is just above the chest. Now kick your right leg and hand downwards by releasing the fold along with bringing the left leg and hand in such position simultaneously. The whole process is similar to cycling the pedal of a bicycle. Hold your fist throughout this step. Repeat this process for 10 times. (fig o)

Now relax for 30 seconds in the savasana posture. (fig p)

1. The stretching in stage 2 is analogous to the first stage. Turn your body to the opposite as your front is facing the ground. As like before place your hands at 45 degrees with your body. The legs should be close to each other by resting on fingers without touching the knees on the ground. Now twist the head towards the right side as well as twist the legs and the body to the left side. The side of the foot should touch the ground while the other is above it. While twisting the head toward the right, the palm of the right hand with the joint fingers should face downwards where the other hand remains facing upwards. Also, while twisting the head to the left, the position of the hands should also be alternated. This type of movements of the hands should be continued throughout the 2 stage excluding the last 2 steps. Repeat the twist for five times. (fig a, b, c)

2. Now fold your legs towards your back by aligning the feet vertically. Twist the body for 5 times as before. (fig d, e, f)

3. Place your right leg over the other such as it crosses at the ankle and repeats the movements as said before. (fig g)

4. Similarly, place our left leg over the other and repeat the twisting.

6. Alternate the legs position and repeat the twisting.

7. These movements are analogous to step 9, but little tricky compared with it. Place the legs 30 degrees to each other. Slightly lift the hands and body above the abdomen. The hands should be folded and position it as the middle finger touching each other with the nail and lie in the same vertical line with the nose tip. Fix your sight on the nail and move the lifted part of the body to the right side along with the hands. Remember the position of the hands should not be changed as it moves along with the body with eyes fixed on the nails. Simultaneously hit the posterior at right with the heel of the right leg. Twist the body to the left and similarly hit the posterior at left with the heel of the left leg. Repeat the twisting for 5 times as before. The twisting should be done at such a speed that it should take approximately 6 seconds for five times. (fig j, k)

8. Finish the above movements on the right side. Now relax in this position with the palm of the right hand facing down with the folded hands. The shoulder and elbow should lie in a straight line. The left hand should be placed in such a way that it is slightly folded with the palm facing upwards. The left leg should be straight whereas the right leg is in folded. Relax for 1 to 2 minutes. (fig l)

Note: Keep your eyes closed in all the steps other than the step 7 of the second stage. This helps in focusing internally rather than externally. Hence, not gets distracted. (Read also 10 Benefits of Practicing Kundalini Yoga and Meditation)